Enjoy these five Superfoods during your holiday meals

(NaturalNews) A superfood is usually defined as a class of plant based foods known for its very high antioxidant content that provides multiple disease fighting nutrients. Many of you have heard of the great benefits of the goji and acai berry. But did you know that many traditional holiday foods are also considered superfoods? Cranberries, blueberries, sweet potatoes, pumpkin and broccoli are among the top of the list.

Cranberries are among the top foods with proven health benefits, according to Amy Howell, a researcher at Rutgers University. Cranberries are full of antioxidants, which protect cells from damage by unstable molecules called free radicals.

Eating cranberries can block urinary infections and kill H. pylori bacteria which can cause stomach cancer and ulcers. The proanthocyanidin found in cranberries helps to prevent plaque formation on teeth.

Blueberries are rich in compounds that help protect the heart and may inhibit the growth of cancer cells. Studies suggest the blueberry anthocyanins protect against neurodegenerative diseases like Alzheimer's and Parkinson's, and they can slow and even reverse age-related memory loss and decline in cognitive function. They can be eaten in a holiday smoothie or pie. 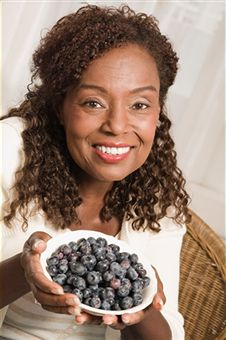 Sweet potatoes are high in fiber, Vitamin A, Vitamin C, Vitamin B6, potassium and manganese. They can also help stabilize blood sugar, which means they're a good choice for diabetics. They're relatively low in calories for all of the nutritional power they pack, at approximately 95 calories each. Elisa Zied, MS, RD, spokesperson for the American Dietetic Association and author of Nutrition At Your Fingertips, says, "If we eat more foods like sweet potatoes that are rich sources of potassium, and fewer high-sodium foods, we can blunt the effect of sodium on blood pressure and reduce bone loss."

Pumpkin while raw has only 15 calories per 1/2 cup and is full of iron, zinc, and fiber. It's high in vitamin C and beta carotene. According to Steve Pratt, MD, author of SuperFoods Healthstyle, "Pumpkin is also one of the highest sources of alpha-carotene, a powerful member of the carotenoid family that's inversely related to cataract formation and boosts immunity."

So, try a raw pumpkin pie after a holiday meal. And, don't forget to eat the seeds. Pumpkin seeds are a good source of protein and fiber, iron, magnesium, phosphorus, potassium, zinc, copper, and manganese.

Broccoli is rich in vitamins, minerals and fiber and contains phytochemicals called glucosinolates and isothiocyanates. UK scientists have uncovered the ingredient in broccoli which helps to fight prostate cancer.

Researchers believe a chemical called sulforaphane in broccoli works with cells which lack an anti-tumor gene to fight prostate cancer.

Eat these powerful superfoods with your family during the holidays and feel good about your health.

(NaturalNews) Taking antidepressant drugs like Risperdal (risperidone) and Seroquel (quetiapine fumarate) could cause you to gain a lot of weight very quickly, according to a recent report in CNN. Atypical antipsychotic drugs are responsible for causing voracious hunger episodes in roughly 30 percent of patients who take them, which can lead to some seriously rapid weight gain.

Earlier in the year, the U.S. Food and Drug Administration (FDA) began an investigation into antipsychotic drugs and their link to weight gain. The announcement came shortly after the agency approved two popular antipsychotic drugs for children between the ages of 13 and 17 (http://www.naturalnews.com/028668_a...).

The drugs -- which include the aforementioned as well as Zyprexa (olanzapine), Abilify (aripiprazole), and Geodon (ziprasidone) -- appear to trigger enzymes that induce appetite. In one case, a young girl taking risperidone gained 5.5 pounds, or 14 percent of her body weight, within one year. And a 19-year-old college student on the same drug as well as other anti-anxiety medications gained 25 pounds in just six months.

A 2007 study conducted by researchers from Johns Hopkins University and the University of Vermont found that both Zyprexa and Clozaril (clozapine) increased appetite levels by 400 percent. And earlier this year, a study published in the journal Obesity found that men who took Zyprexa for a mere two weeks increased their eating consumption by an average of 18 percent.

Experts are urging the public to be cautious about the use of such antipsychotic drugs. Not only do they induce appetite and subsequent weight gain, but they can also lead to high blood pressure, elevated blood-sugar levels, heart disease, and diabetes.